The Red Box cake off took place recently and, as you would expect when cake is involved, it was a huge success!

The contestants this year were Vicky, Sarah, and Ed but, as you may have noticed, there are only two cakes featured due to Ed’s being ‘poorly’ and therefore didn’t make it into the office for judging. It did however arrive the following day and was a delicious chocolate cake with Nutella ganache, but we won’t discuss it’s appearance.

The judging consisted of a décor and taste vote.

The Victoria Sponge cake was expertly designed by our very own Vicky which featured 3 recognisable features adorned on top and dainty sugar stars. Her family recipe for victoria sponge, homemade icing and a gentle layer of jam; took home the coveted ‘taste’ vote of the competition! ”A perfect balance of cream and jam!” was overheard from a member of the judging panel.

The second cake engineered by Sarah, featured was a breathtakingly life like recreation of a photo featuring the directors and our engineering manager. They stood proud (and slightly wobbly) on top of two tiers of lemon sponge cake, lemon buttercream filling and an all sugar ‘red box’. The string of Christmas lights (if that’s what we want to call them) featured Crispy M&M’s. This masterpiece showcasing an eye for detail, and a brilliant sense of humour took home the ‘décor vote’ of the competition.

Some comments from the general public on cake off day:

”I didn’t know we were having a cake off”

We are already counting down to next year’s Red Box Cake Off! 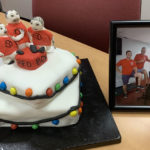 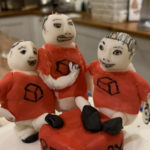 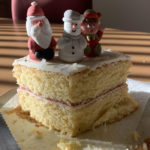 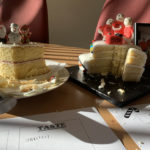 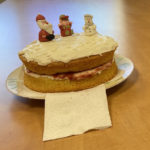 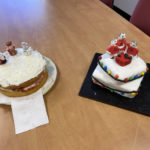 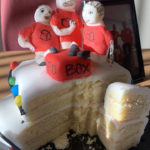